31 October 1760 – 10 May 1849}}, known simply as Hokusai, was a Japanese artist, ukiyo-e painter and printmaker of the Edo period. Hokusai is best known for the woodblock print series ''Thirty-Six Views of Mount Fuji'' which includes the internationally iconic print ''The Great Wave off Kanagawa''.

Hokusai created the monumental ''Thirty-Six Views of Mount Fuji'' both as a response to a domestic travel boom in Japan and as part of a personal obsession with Mount Fuji. It was this series, specifically ''The Great Wave off Kanagawa'' and ''Fine Wind, Clear Morning'', that secured his fame both in Japan and overseas. While Hokusai's work prior to this series is certainly important, it was not until this series that he gained broad recognition.

Hokusai's work transformed the ''ukiyo-e'' artform from a style of portraiture largely focused on courtesans and actors into a much broader style of art that focused on landscapes, plants, and animals. Hokusai worked in various fields besides woodblock prints, such as painting and producing designs for book illustrations, including his own educational ''Hokusai Manga'', which consists of thousands of images of every subject imaginable over fifteen volumes. Starting as a young child, he continued working and improving his style until his death, aged 88. In a long and successful career, he produced over 30,000 paintings, sketches, woodblock prints, and images for picture books in total. Innovative in his compositions and exceptional in his drawing technique, Hokusai is considered one of the greatest masters in the history of art. Provided by Wikipedia
1 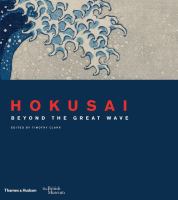